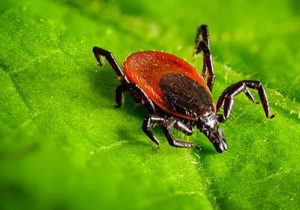 Lyme disease is the most common tick-borne disease and is one of the fastest-growing infectious diseases. The Centers for Disease Control and Prevention admits to over 300,000 new cases per year! In reality, as we have seen in our office percentage-wise, we believe it’s much greater than that and prevalence is rising.

Since national surveillance began in 1982, the number of annual Lyme cases reported has increased by nearly 25 fold. The disease is also spreading geographically. Between 1993 and 1997, 43 counties across the U.S. had a high incidence of Lyme disease. By 2012, the number had skyrocketed to 182 as reported by TIME Magazine. According to the CDC, Lyme is not only rampant in the hotspots, but is rapidly spreading across the country. Lyme has increased by 320 percent. It is now appearing in many states where it never had been previously recorded.

Lyme disease is a unique disease with many diverse symptoms. It is caused by the infectious spirochetal germ Borrelia burgdorferi. Its cousin germs, Bartonella
henselae. Babesia microti, and the bacteria of the Ehrilichia species cause related diseases. There are over 100 species of Borrelia and 100 species of Babesia.

These germs all have characteristics that are similar to the spirochete that causes syphilis, Treponime pallidim. Therefore, they are corkscrew shaped which enables them to burrow deep into the connective tissue. To add insult to injury, these bugs are pleomorphic, meaning they can change shape at will, go flat, and burrow deeper into the tissue, then go round. The can also live intercellulary, which is why they evade antibiotics. They also bind to the heavy metals in your system and create an armored protective shell. Antibiotics can not penetrate this shell. Lyme is spread by ticks, mosquitoes, spiders, fleas, saliva, breast milk and can be sexually transmitted, according to Richard Horowitz, MD Hyde Park, New York and DesBIO Homeopathic. It has recently been found to also be transmittable in the saliva of other animals including pet dogs.

Interestingly, one of the reasons blood tests are so unreliable is that the spirochete is capable of infecting white blood cells. Since lab tests rely on the normal function of these cells to produce the antibodies they measure and are infected, they will not respond to an infection appropriately. The worse the infection, the less likely it will show up on a blood test. The standard Elisa test is no better than 50/50, according to Richard Horowitz, M.D.

Johns Hopkins says it misses 55 percent of Lyme positive patients. The CDC and the New York State Department of Health says it missed 81 percent of the people that did not have a bulls-eye rash.

There are three phases in Lyme disease:

One of the most important aspects of developing a Lyme disease treatment protocol is to strengthen and restore the immune system. Lyme disease bacteria and associated neurotoxins are immunosuppressive. Since homeopathy stimulates the body’s response to the disease it is basically able to “jumpstart” the immune system to engage in the fight against the infection. A combination of homeopathy, Chinese herbs and glandular has proven successful for patients for the last nine years.

The word “homeopathy” is derived from two Greek words: homoios which means “similar” and pathos which means “suffering.” Homeopathy’s basic premise is called the “principle of similar,” ad it refers to recurrent observation and experience that a medicinal substance will elicit a healing response for the specific syndrome of symptoms (or suffering) that it has been proven to cause when given in overdose to a healthy person.

The beauty of the principle of similar is that it not only initiates a healing response, but it encourages a respect for the body’s wisdom. Because symptoms represent the best efforts of our body in its defenses against infection or stress, it makes sense to utilize a medicine that helps and mimics this defense rather than that inhibits or suppresses it. The principle of similar may be one of nature’s laws that, when used well, can be one of our most sophisticated healing strategies.

Homeopathic medicine also once had a major presence in American medical care and society. IN 1900, there were 22 homeopathic Medical schools in the U.S&gt; including Boston University, University of Michigan, New York Medical College, Hahnemann University, University of Minnesota, and even the University of Iowa. Further, many of America’s cultural elite were homeopathy’s strongest advocates, including Mark Twain, William James, John D. Rockefeller, Susan B. Anthony, Louisa May Alcott, Henry Wadsworth Longfellow, Henry David Thoreau, and Harriet Beecher Stowe, among others.

The principle is to regulate antibody production, upregulate immune response, repattern the body’s energy pathways, minimize clearing reaction, get better effects with multiple potencies and reverse dilutions, enforced by ultra-high potency follow-up support. One can expect positive outcomes for both chronic and acute infections. This is one of the most powerful homeopathic approaches to infection available.

Initial testing via acupuncture points takes about an hour, until satisfactory balance is achieved with Chinese hers and homeopathic remedies. Depending on the length of the illness and number of co-infections, treatment generally takes six to eight months for full recovery.

For more information on Lyme Disease, there are articles in our blog.

I have been going to chiropractic in motion for 10+ years. I watched their growth in holistic medicines. Every new avenue did they choose to start practicing I try. Chiropractic adjustments with acupuncture, herbal supplements, and the ART, give me lot of relief with the aging aches and pains, that we all will eventually get. Both Dr. Kramer and Dr. White, put the health of their patients first.

They were very helpful. Made me feel comfortable with the testing. On my way to feeling better. Thanks to Dr. Shannon. I would highly recommend them to my friends and family.

Can’t say enough about the knowledge of real health care in his office. Dr Shannon knows so much about the body that is makes your head spin! So grateful for her knowledge and understanding!

I saw Shannon for a neck injury when I lived in Des Moines. Not only did she do a phenomenal job adjusting me, but she also focused on teaching me exercises on how to strengthen my neck to avoid future issues. If I still lived in Des Moines I would definitely still use Chiropractic in Motion.